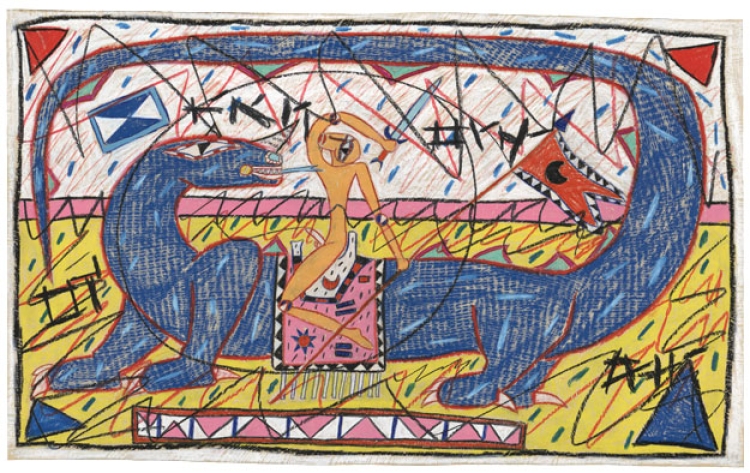 François Burland (1958) was born in Lausanne (Switzerland). He began drawing in self-taught fashion at the end of his adolescence. He undertook a first trip to Egypt's Sinai Peninsula at the age of twenty. A few years later, he encountered the Tuaregs in the Sahara Desert. Enthused by their nomadic lifestyle, he began returning to the region regularly over some thirty years. During his long stays with the Tuaregs, he shared their daily life, including their dromedaries and witchcraft, but also their 4x4s, mobiles and kalachnikovs.

This creator has produced an abundant and varied oeuvre. Depending on each series and on his inspiration of the day, he avails himself of a number of techniques and materials. For his drawings, he prefers to use wrapping paper as a support: he applies pastels, colored pencil and white chalk to very large surfaces. His creations bring to mind shamanic art; they combine historic sources, literature and ethnology. François Burland also creates diverse objects — boats, planes, rockets, cars — using materials salvaged from landfill sites, as well as more recently, several monumental installations. Since 2011, he has been working on various artistic projects with young refugees to Switzerland and, currently, his attention centers mainly on these collective works.