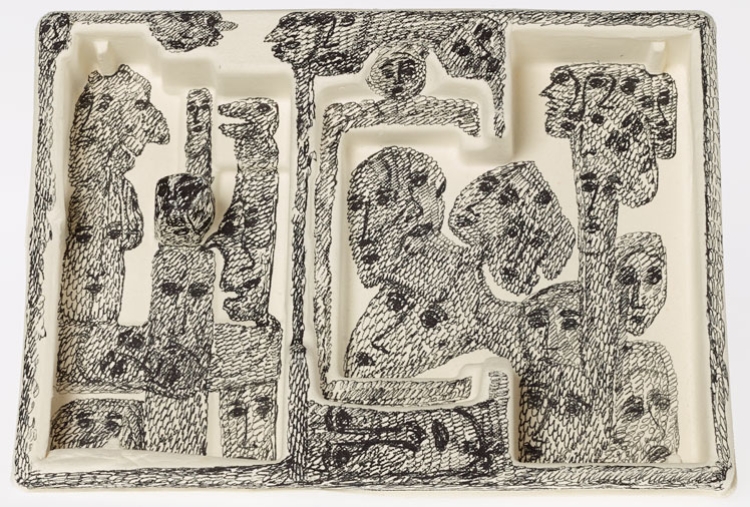 Mehrdad Rashidi (1963) was born in the city of Sari, on the Caspian Sea (Iran). In 1983, as an opponent to the Iranian Islamic Republic, he and his brother went into exile; they traveled across Pakistan and Afghanistan to reach Russia. For five years, Mehrdad Rashidi lived in Moscow, where he studied journalism at the university. Thereafter he left for Germany, where his brother had been welcomed as a political refugee. He earned a living with sundry jobs, moved several times, and has now settled in a little town near Düsseldorf, where he lives to this day. He has two sons, for whom he spends most of his time. At forty-three, he began drawing, inspired by his brother's participation in a small exhibition organized by the municipal cultural department.

He now continues to do so daily and as often as possible, using ballpoint pen and various salvaged items such as used papers, envelopes, book covers. These he covers over in his thick and precise lines. His pictorial world brings to mind calligraphy and traditional Iranian ornamental art. Yet in his drawings, Mehrdad Rashidi develops highly original motifs — mainly interlocked human heads and faces that emerge out of each other with a figurative logic all of this creator's own. For several years now, Mehrdad Rashidi has also been writing poems: these he sometimes inserts into his works, as if belonging to the composition itself.