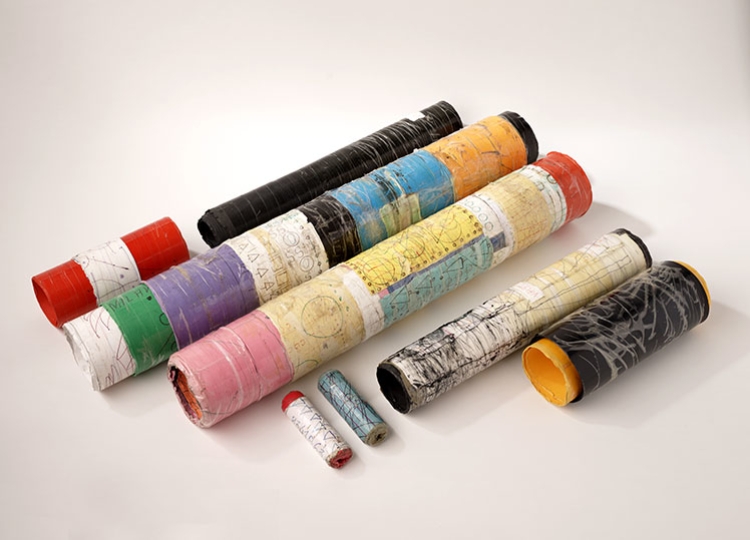 Antonio Dalla Valle (1939–2020) was born in Roncio, in the province of Trento, in northern Italy. Brought up heavy-handedly by his distant and ageing parents, Dalla Valle found it hard to mix with children of his own age. His school years were largely spent writing and drawing alone and in silence; he showed no interest at all in collective pursuits. Later, he worked as a labourer on building sites before leaving to try his luck as a bricklayer in Germany. He became enormously homesick and felt lost in an alien environment, to the extent that when he returned in 1962, Dalla Valle had to be committed to a psychiatric hospital. It soon became hard for him to get on with the staff and it was only through his writing that he was able to express himself properly. In 1997, Dalla Valle was moved to a hospital near Cremona, where he attended the creative workshop. He started gradually covering pieces of paper or cardboard with writing and mysterious symbols. Once cut out, he would put them into transparent plastic containers or carefully made plexiglass boxes. These works were then tied up with string or adhesive tape, an operation that was designed to decorate and to hide at one and the same time. His sculptures are imbued with mystery and look like magic boxes whose contents are known only to the artist. Once a work was finished, Dalla Valle would take it with him wherever he went as part of a ritual, before abandoning or destroying it as soon as he decided its power or purpose had run its course. He would even use his own body as a medium, wrapping his left foot in a strip of cloth every day and covering his wrists with the numerous watches he collected and wore as symbolic lucky charms.