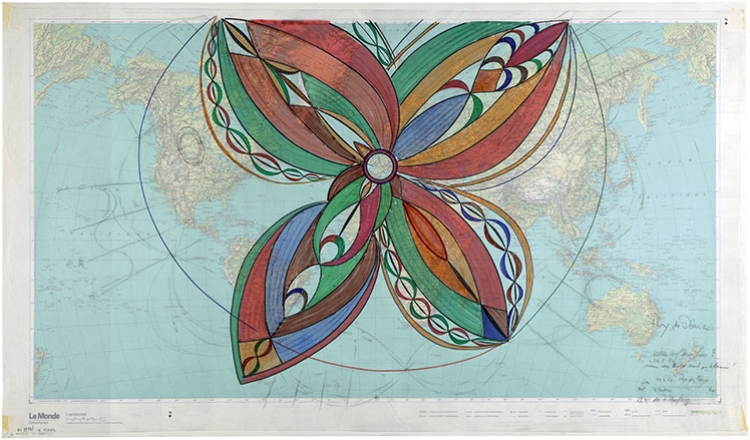 Werner Hertig (1908–1985) was born in Winterthur, Switzerland. After an apprenticeship as a machine operator, he worked for many years in the field of research and development for various companies. In 1959, he moved to Lausanne, where he took over a medical syringe factory. Finding pieces of Roman tiles on his land in Crissier, he started to dig and discovered the foundations of an ancient farmhouse. After that he began using a pendulum to look for hidden objects or sources of water, finding several more Roman remains in the process. Impressed by the results, Hertig took to dowsing in a serious way from 1976, combining it with the study of cosmic rays and those from the earth’s core. In order to do this, he placed a sheet of tracing paper over a map of the area or a ground plan that had a pre-established grid system. He then let himself be guided by the movements of the divining rod in his right hand as it vibrated under the effect of the terrestrial rays. He recorded these oscillations by turning them into lines traced on the transparent paper, showing lines of power, areas of vibration, or watercourses. While the divining system served to collect information, Hertig’s efforts were aimed at identifying the epicentre of the disturbance and advise those who were affected by it to use a particular room for a different purpose, for example. In his final years, Hertig dedicated his time to trying to discover if and by what means it was possible to block rays that cause disease. The idea was to develop an instrument that would eliminate harmful rays. As part of this scheme, he started producing little wooden rings that he would place at specific points or use as pendants to protect the body and living area from the effects of harmful energy.