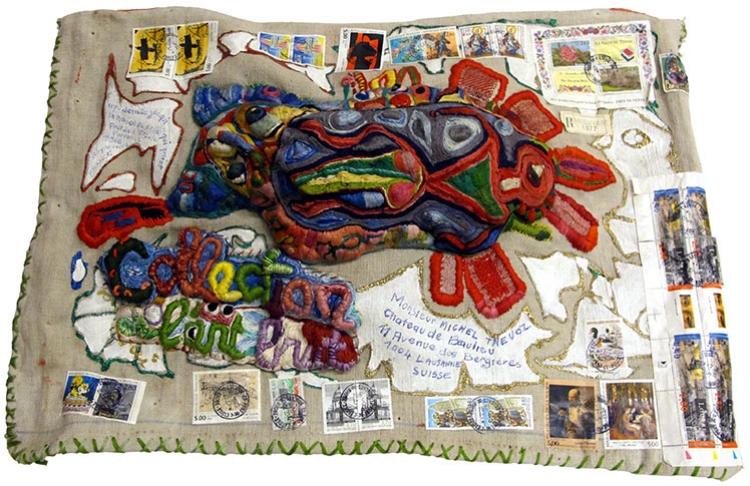 Danielle Jacqui was born in Nice, France, in 1934. Her mother, a militant feminist who later joined the Resistance, and her father, a jeweller, separated when she was still an infant. After a period in boarding school she was placed with a foster family, and left school at the end of the Second World War. She married when she was eighteen; the couple had four children and ran a construction business together. Already attracted to art books, Jacqui began drawing and making small installations, but it was only in 1970, when the couple divorced and she became a secondhand dealer, that she really began working as a self-taught artist. With a new husband – also an ardent secondhand dealer – she kept a shop where her finds and restored pieces rubbed shoulders with her paintings, assemblages and quirky embroideries.

She went on to become a major figure in Art Singulier (Marginal Art) – sometimes referred to as Neuve Invention or "non-standard art" – and found expression in writing, drawing, painting, embroidery, ceramics, sculpture and assemblage. From 1973 on she exhibited in Europe, the United States and Japan. In the course of various projects she worked with the group of marginal artists led by the painter and sculptor Raymond Reynaud, founder of the Atelier du Quinconce Vert, a workshop for self-taught painters.

In the mid-1980s she began making the imposing anthropomorphic embroidery pieces, that are a core part of her œuvre. At the same period she discovered outsider artist Robert Tatin, whose eccentric house so enchanted her that she set about totally transforming her own, at Roquevaire in the south of France. Every room, including the kitchen and bathroom, was decorated from floor to ceiling with paintings, sculptures, embroidery and various bits and pieces, while the facade of "The House of the lady who paints" was overlaid with mosaic and miscellaneous salvaged items. An ongoing series of residencies and exhibitions brought more and more personal and collective projects, and in 1990 she founded the International Festival of Marginal Art in Roquevaire. In 2001 the festival transferred to nearby Aubagne, where a rich and varied programme of work by self-taught artists is present every two years.