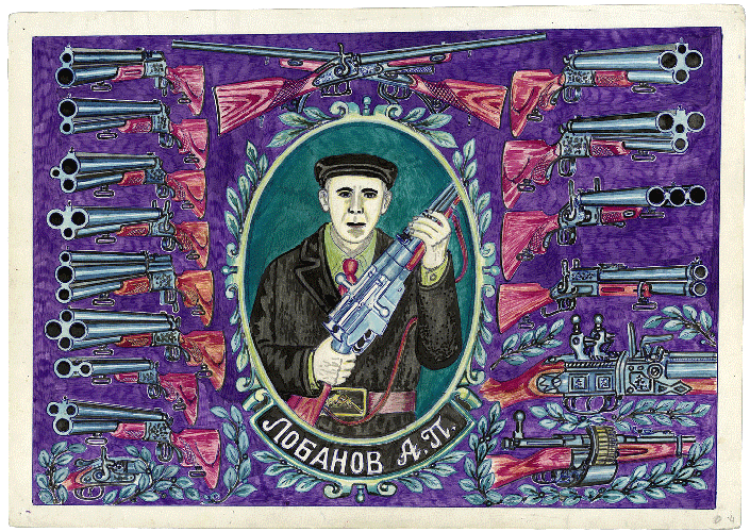 Aleksander Pavlovitch Lobanov was born in Mologa, Russia. Following meningitis, the child became deaf and dumb and was affected by a weakening of intellect. He lived for some time in a boarding school, then worked in a factory in Yaroslavl, where his family had settled before the Second World War. He used to draw in his spare time. In 1947, aged 23, he was confined to a psychiatric asylum because of his aggressive behaviour.
Although autistic, Aleksander Lobanov struck up a friendship with a member of staff at the establishment, a lorry driver whose passion for hunting he shared. In his company he would go to toy shops and haberdasheries where he acquired various objects. He would divert these from their true function and make them into coats of arms to adorn the lapel of his jacket.

Around ten years later Lobanov started executing compositions in gouache, coloured pencil or ball-point pen notably on the back of Cold War posters. He would first draw a frame on the sheet of paper, sometimes filling it with decorative elements or with writing in Cyrillic characters. The space marked out beforehand was reserved for portraits of political figures, self-portraits and hunting scenes, with an abundance of firearms: rifles, pistols, revolvers or bayonets are depicted side by side and strike the viewer through their disturbing realism. Elevated to the rank of icons, they multiply within the drawing, creating dizzying depths.