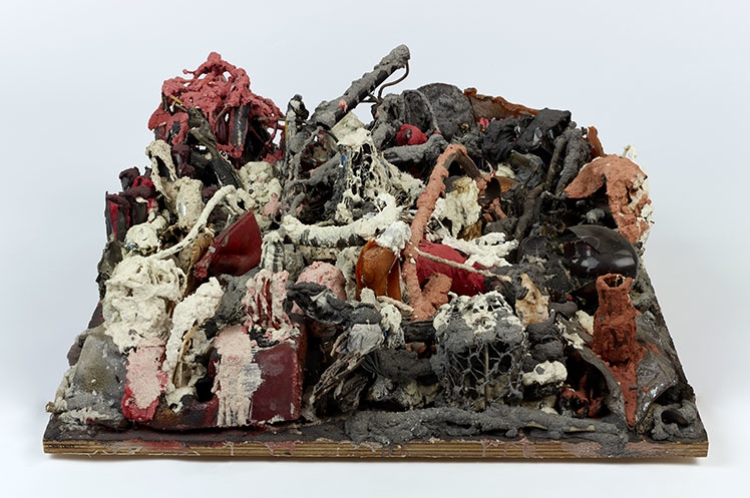 Marc Moret (1943–2021) was born on a farm in Vuadens, in the Swiss canton of Fribourg. Since his parents and grandparents were country folk, he was raised as one too and so he remained, never leaving the family environment. He was a vegetarian and never killed an animal. He looked after his heifers with the greatest tenderness and lived surrounded by his cats. After passing through a phase during which he wrote a lot, he turned to painting, producing brightly coloured abstract pictures, as well as distorted faces and bodies. He then devoted himself essentially to producing three-dimensional collages made of all sorts of materials, without worrying about making something that was beautiful or even merely attractive. Using homemade glue, he assembled various objects found among his mother’s things — pieces of broken glass, bits of cloth, buttons — as well as calcified animal bones, tubular tyres, and the hair of the elderly, which he got from the village hairdresser. All these articles were piled up on a wooden support, the accumulations eventually resulting in towering architectural structures that he installed in a room on the first floor of the farm, where he lived alone after the death of his parents. Moret was extremely attached to his creations and would make a daily visit to the first floor, where he would gather himself and contemplate them in memory of his lost ones. His sculptures were nothing short of contemporary reliquaries that were able to establish a connection between the artist, the deceased, and death itself. As with shamans or certain voodoo beliefs, their creator attributed to these works protective, purifying, and even healing powers that accompanied him during his daily rituals.