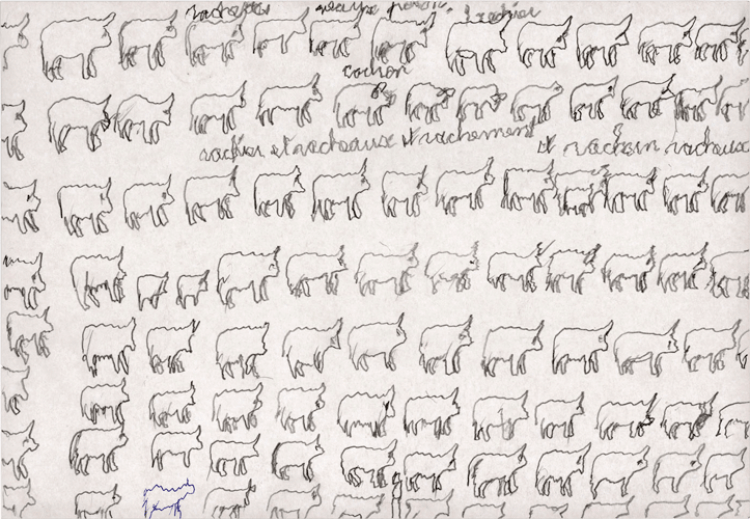 A native of Attalens, in the canton of Fribourg (Switzerland), Gaston Savoy grew up and lived on the family farm. When, by the age of nine, he was still not speaking, he was admitted to the Le Guintzet institution for the deaf and hard of hearing. There he followed classes adapted to his capacities and discovered a taste for drawing. As it turned out, Gaston Savoy was not deaf but hard of hearing, in conjunction with a slight mental handicap. At sixteen, he returned to the family farmstead where, as a teenager, he spent his time chopping wood for the household and carrying out sundry minor household chores.

His family always saw him drawing on all kinds of supports: on cardboard, the backs of envelope, newspaper margins, pieces of wood... They did not keep most of his first drawings. Upon being admitted to the Charitable Hospice St. Joseph in Châtel St-Denis in 1988, at the age of sixty-five, he continued creating, going on to produce some two hundred pieces.

For the most part, Gaston Savoy drew in series that repeat various animal motifs, such as cows or sheep: these are reinterpretations of the "poya" (cattle drive) motif. He also depicted ritual festivities like the "Bénichon" (a traditional canton of Fribourg festival in thanks for a bountiful harvest) or the Saint-Nicolas (the City of Fribourg's patron saint, honored the first Sunday of December).