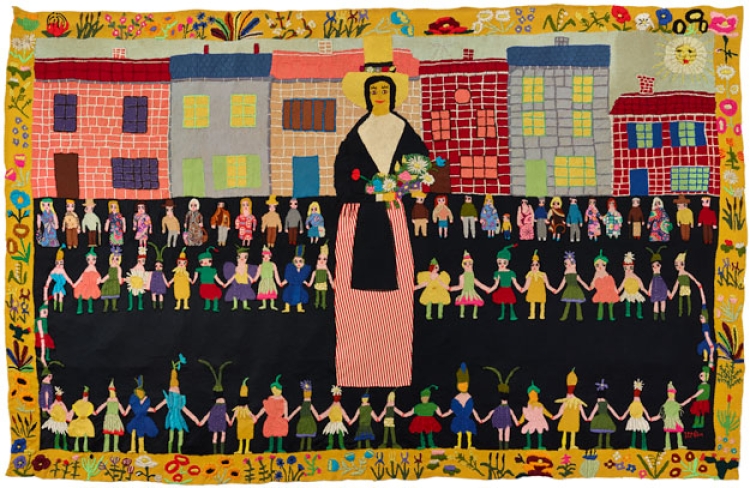 Jacques Trovic was born at Anzin, in the mining suburb of Valenciennes, northern France. As a result of illness, he had to leave school at the age of seven and all forms of physical activity were forbidden him. He subsequently managed to get himself admitted for a few hours a week to the Académie des Beaux-Arts in Saint-Armand, which he attended for some years. There he learned the mosaic technique, but the material was heavy to transport. He ended up replacing the mosaic support by hessian and the small earthenware squares by textile and thread.

Since he was sixteen and continuing to the present day, he has cut up pieces of fabric or felt, sewn and embroidered, like his mother and sister. Jacques Trovic sometimes works more than twenty hours a day in the small kitchen in the apartment which he shares with his sister. This room is a shambles, heaped with balls of wool, needles, bags, and gold and silver thread which he obtains at the market. The subject matter of his hand-embroidered tapestries are Carnival, popular dance scenes, festivals and everyday life. As he wants above all to express cheerfulness, the sun is a recurrent motif in his work. The style evokes the pictures produced by naive artists; the subjects made of felt, which are reminiscent of the patchwork technique, are appliquéd flat, creating a relief effect.