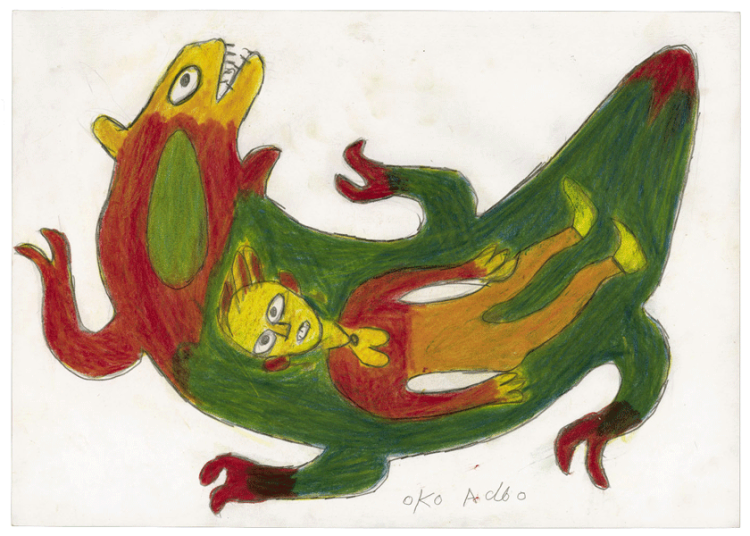 Ataa Oko was born in La, Ghana. He first earned his living as a fisherman, before hiring out to work on the local cocoa planta-tions. After an apprenticeship in carpentry begun in 1936, he crafted his first figurative coffins in about 1945, going on to open his own workshop in his hometown. In his later years he rarely produced any more coffins, except for the occasional commission.
Ataa Oko’s graphic output dates from after his encounter with the ethnologist Regula Tschumi, in 2002, at the age of eighty-three. Engaged at the time in research on funerary sculptures, Ms. Tschumi asked him to draw from memory his former figurative coffins he had actually built as a past craftsman carpenter – one, shaped like a fish, for a fisherman; and one in the shape of a tomato, for a farmer.

As the years passed, this creator let go of his memories in favour of compositions teeming with new, vividly coloured subjects: fanciful animals, and imaginary - at times even monstrous - figures and beings. Constantly in touch with the Hereafter, Ataa Oko was visited by spirits that he was wont to depict on paper. And although many of his drawings (over 2'500) are fired by flights of fantasy, they also feature images of everyday objects, of the sort conducive to stimulating his creativity.