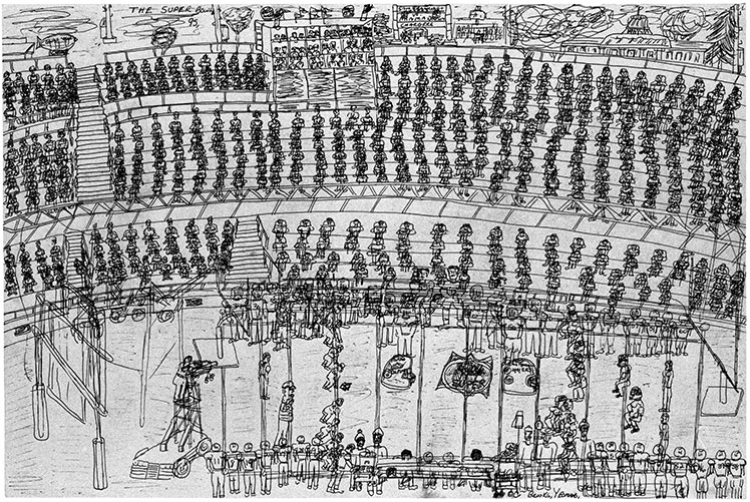 Brooks Yeomans (1957) was born in Cleveland County, North Carolina, USA. He suffered from a slight intellectual disability but had a happy childhood, growing up with three sisters. From an early age, his family encouraged him to draw and paint. He created his first compositions at home, supported by one of his older sisters who realized the value of his work.

In 1991, after his mother’s death, he was placed in a home where he continued his ballpoint and felt pen creations. His works were noticed and lauded for the first time outside his family circle. He was then admitted to the Signature Home in Morganton, a facility for adults with mental disorders, which also served as a studio and gallery. Yeomans quickly adapted to this stimulating environment and discovered new techniques, such as acrylic.

Blessed with an exceptional memory, Yeomans evoked in his compositions the most important events of his life, but also his daily activities. He drew very detailed panoramic views of rooms or, using oblique projection, of theatres, festivals, and exhibitions. His works are true narrative sequences in which Yeomans often depicts himself, either as the artist drawing from life or as one of the participants in the events he illustrates. In order to show every aspect of a given scene, he would often show places simultaneously from different viewpoints, so that the inside and the outside of a place would be visible within the same piece of work.