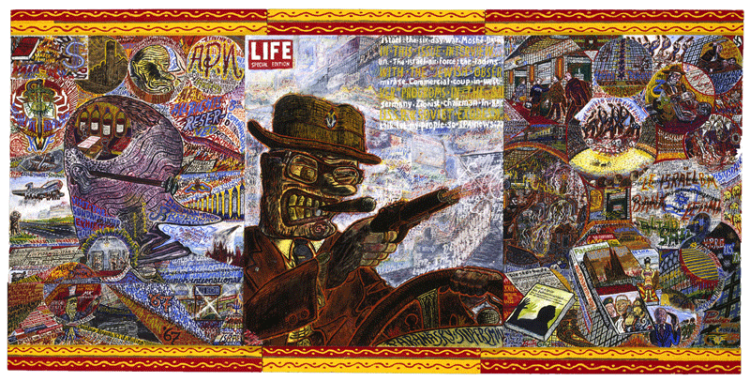 Willem van Genk (1927–2005) was born in Voorburg, in the Netherlands, the only boy in a family of ten children. He lost his mother when he was four and was afflicted with learning difficulties and behavioural problems at a very early age. He began to draw at school and at home, finding in this mode of expression an escape from a lonely and difficult childhood. After a spell in an orphanage until he was thirteen, he went to live in The Hague and attended a technical school, which he left before finishing his education. His search for work led to a job in an advertising agency; a few years later, still a teenager, he was once again placed in an orphanage, then in a Christian school of arts and crafts, where he took courses in commercial art. Unable to adapt socially, he lost his job and was finally taken in by a workshop for the mentally handicapped in The Hague. Living alone in a small apartment where he had disconnected all the electrical plugs, he spent his small wage on art materials. His pictures used complex cut-up and collage processes and were directly inspired by his many visits to the Soviet-bloc countries, Rome, Paris, Madrid, Copenhagen, Cologne, Prague and elsewhere. He also went for his ideas to various guidebooks and his own travel photos. In 1988 he concentrated mainly on making model buses and in the 1990s he limited himself to producing copies of earlier works, using different coloured pens.

In 1966 a series of heart attacks prevented him from painting, and two years later he was admitted to an old people's home. All the works in his home in The Hague were moved out and the apartment completely emptied. On 12 May 2005 Willem van Genk died of pneumonia.