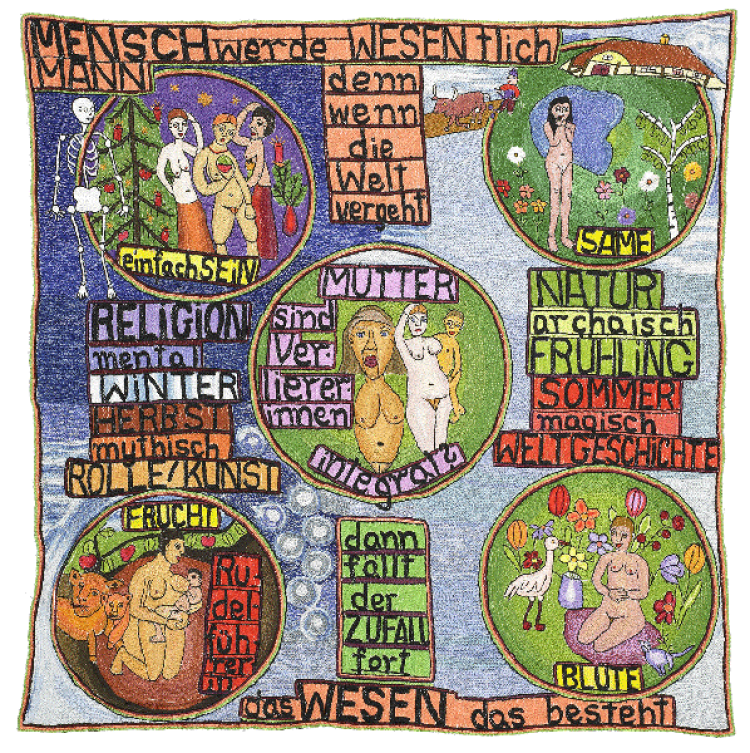 Helga Goetze was born in Magdeburg, in eastern Germany. For more than twenty years she gave provocative “performances” in the heart of Berlin. Every day, summer and winter alike, she was to be found from 11 am to 1 pm on the steps of the Gedächtniskirche or near the University. There, dressed up in her coat and a hat that she had embroidered herself, she demanded the sexual liberation of women loud and clear. Her slogan: “Ficken ist Frieden” (fucking is peace). Helga Goetze led a middle-class sort of life – she was married and raised seven children – before launching herself into creative activity in the late 1960s.

Helga Goetze’s embroideries are sometimes very large (200 x 200 cm) and are brightly coloured. They reveal an unprecedented inventiveness and perfect compositional organisation. They depict scenes alluding to passages from the Bible, which she hijacks, as well as to other faiths, or to sexual images and images of procreation. In them one sees numerous female nudes, dancing or stretched out in lascivious or provocative poses and set in flowery, idyllic landscapes. Every scene, often contained within a circle, is accompanied by short texts. The latter are presented in the form of protest aphorisms setting out the precepts of a new morality.
Helga Goetze blatantly redefines the imagery of traditional embroidery: she denounces the inhibitions and taboos associated with sexuality and demands carnal, erotic pleasure. She thus proclaims women’s sexual liberation via a technique that was once the symbol of their subjection.