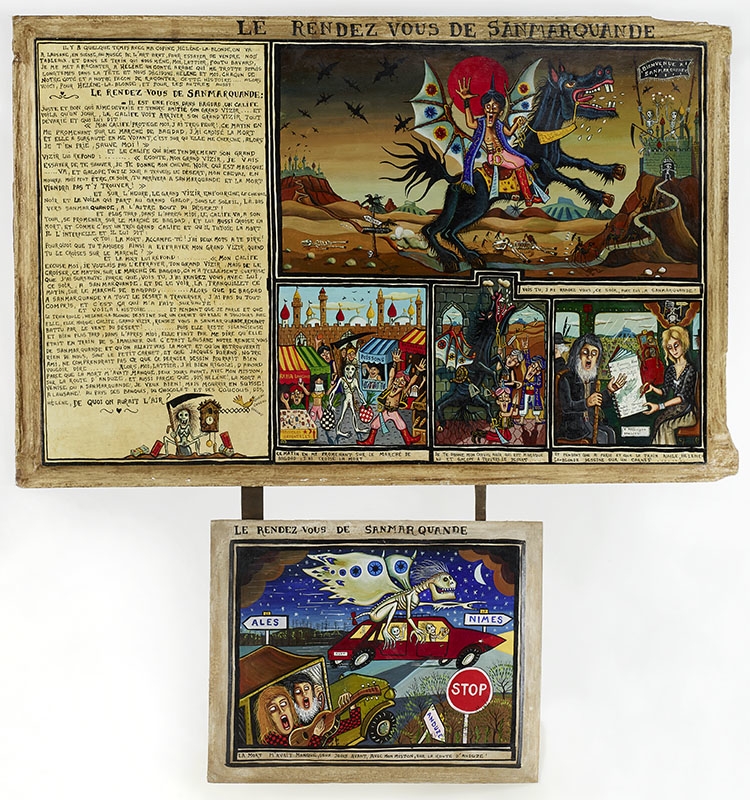 Gérard Lattier (1937) was born in Nîmes, in the Gard département in the South of France. In 1944 his father was killed during an Allied bombing raid, leaving his mother virtually destitute. After graduating from vocational high school he found work as a cleaner for the City of Nîmes, but when he was twenty and refused to fight in Algeria, he ended up in prison, where he began to paint. His pictorial record of that time is one of hallucinatory cruelty, "monstrous monsters", skeletons and tortured, emaciated bodies.

In 1965 a temporary bout of near-blindness brought on a nervous breakdown. That same year, he met Annie; they married and a son was born the following year. Lattier recovered his sight and went back to painting, abandoning oils, Indian ink and etching in favour of gouache, while gradually turning to new subjects and a more marked narrative dimension. Writing in both patois and French, he began inserting texts, often humorous and increasingly long, based on stories he had made up or illustrated.

Gérard Lattier became a public storyteller and a repository of popular beliefs, legends and news items from the neighbouring Ardèche département and elsewhere. In his works, Lattier multiplies frames within the frames, speech bubbles and narrative sequences, as in medieval illuminations; but the goal here is to denounce clericalism, militarism and patriotism.