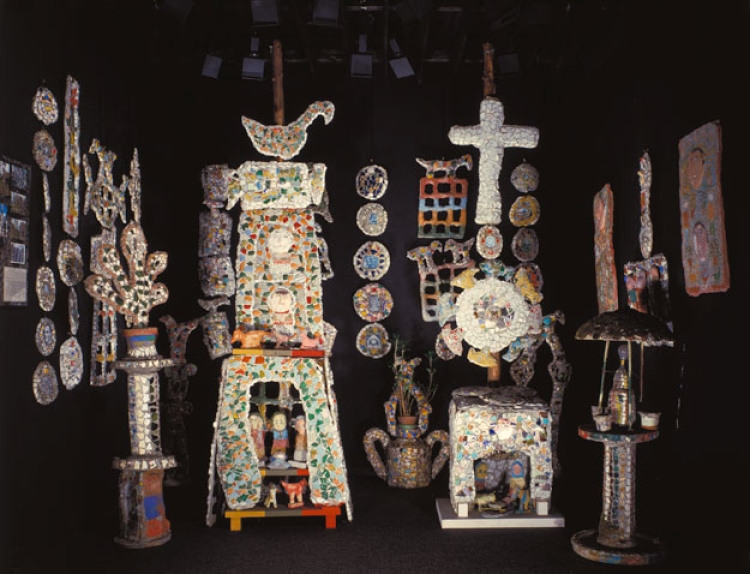 François Portrat was one of many siblings belonging to a farm family in a village in the department of Saône-et-Loire. At fifteen, the young boy left the village for Paris, where he found a job in a pharmacy and then a drugstore. Here he met his wife, with whom he went on to open a combined bazaar-drugstore in the tiny village of Arnay-le-duc, where the couple had taken up lodgings. His wife left him a few years later, causing him to give the business up and to move to Nice with his two daughters. Subsequently, he settled in Aubervilliers: here he was hired by a chemical products factory until his retirement. In 1947, he acquired a house surrounded by a garden, at Champjean (a hamlet in northern Burgundy), near Sens. François Portrat began sharing his time between his small property and the city of Bondy near Paris, where his daughter lived and where he usually spent the winters.
Meanwhile, in Champjean, he took to peopling his plot of land and the courtyard with painted assemblages and a great number of figurines representing, notably, the key political figures of the day. These he crafted out of the pieces of glass and plates he bought at flea markets or else salvaged from the garbage dumps. His technique was to glue the pieces together with cement and sand, an original process he also used for some four hundred fifty medallions. At their center, moreover, the latter were pasted with photographs of actors cut out from various magazines.