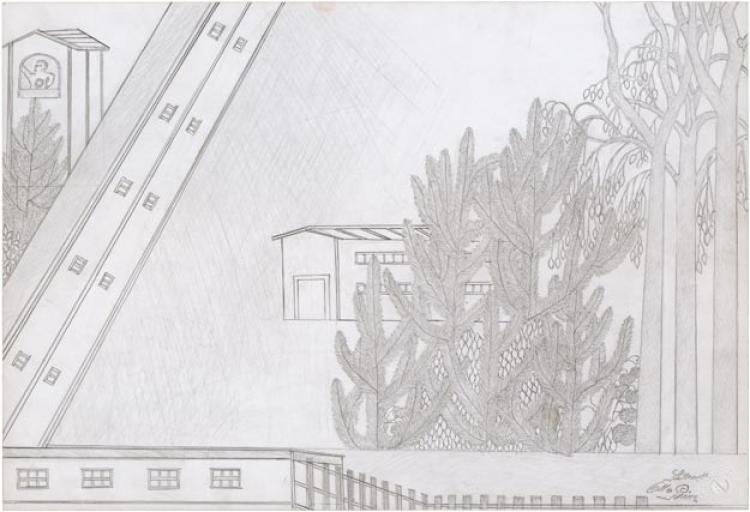 Otto Prinz (1906–1980) was born in Hollabrunn, in Austria. He worked as a butcher for several years. When he was mobilised during the Second World War, he began to show signs of mental disturbance and was finally admitted to the psychiatric hospital at Klosterneuburg, near Vienna, in 1942. Otto Prinz believed he was invested with divine omnipotence and was destined to live the Passion. He kept away from the other patients but openly proclaimed his mystic beliefs. During his first years in the hospital, Prinz wrote poems, played the piano, and went for long walks. One day he started to draw, procuring his own art materials.
He set great store by his works, mostly landscapes with symmetrical buildings and flourishing vegetation. In several drawings he has depicted just the façade, reducing the building to a single flat surface with rows of rectangular windows. Otto Prinz quickly developed a highly personal style and technique: graphite pencil was his favourite medium and he smudged the pencil strokes to obtain a nuanced rendering close to modelling. The variations in tone contrast with the geometrical lines of the architectural motifs. Prinz thus articulates a tension between architecture and nature: the plants and animals sometimes seem to invade the constructions or, on the contrary, are hemmed in by fences, another recurrent motif in his work.