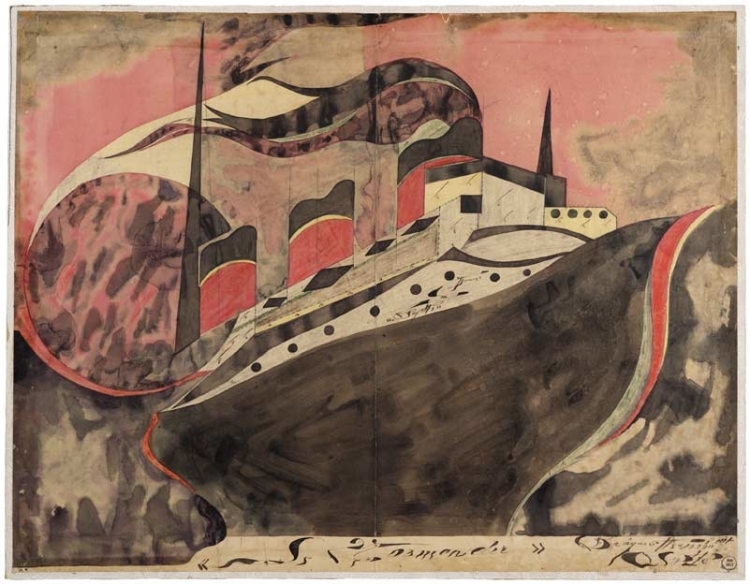 Guillaume Pujolle (1893-1971) was born in Saint-Gaudens, France. As a teenager he worked in the workshop of his father, a cabinetmaker, before enrolling in the army. After being taken prisoner during World War I, upon his release he became a customs officer in Metz, involving himself as well in (the) local politics. He went on to marry but proved subject to violent fits of rage due to his jealousy, excessive meticulousness and an obsession with order. After a murder attempt on his wife he was hospitalized a first time, only to be institutionalized permanently at the age of thirty-three. He is thought to have begun drawing at the hospital as of 1935; his physician Dr. Gaston Ferdière encouraged him in this vein and began collecting his works.

Guillaume Pujolle's oeuvre comprises figurative drawings composed of curling flame shapes, curves and straight lines all struggling to make room for themselves. The drawings are based on photographs or illustrations, which he would distort, interpret and transpose in a creative frenzy. He drew them on sheets of paper strewn across the floor, randomly inserting sinuous or rectilinear lines accomplished with the help of a compass and an angle bracket. He tended to put his whole body into the birth of his creation, translating his gestural impulses on to the paper. The resulting dreamlike world boasts night birds, flying ships, airplanes, as well as strange and tormented figures. Figuration alternates with abstraction. He also enjoyed representing the elements, like the wind, water or fire. Curves intersect and become entangled, the lines turn into curls, arabesques and swirling forms. The enigmatic quality achieved owes much to the many different points of view—frontal faces, bodies in profile, the variations of scale and the intentional distortions.

At first, Pujolle used various pharmaceutical products pilfered from the hospital lab—iodine, methylene blue and Merchurochrome, which he applied as washes. Subsequently he resorted to inks, colored pencils and gouache paints. He made his own work tools, like the paintbrushes he prepared out of locks of his own hair, with a roll of paper as a handle. He also availed himself of compasses, angle brackets and rulers, all of which he would keep under lock in a wood toolbox he never lost sight of. Pujolle gave little artistic value to his drawings and was not wont to hold on to them, preferring to sell them off for a pittance or in exchange for tobacco.

Pujolle stopped drawing most probably as of 1947; instead, he produced items of carpentry, and made himself rings and various talismanic objects. He also came up with fake revolvers and daggers, as well as miniature planes and boats, using cast-offs and crudely carved pieces of wood. His assemblages divert everyday objects from their customary usage; these take on a novel and disconcerting aspect, like the revolver he made out of a toothbrush handle. Poujolle gave up all activity after a fourteen-year period of creativity. He died in Toulouse.