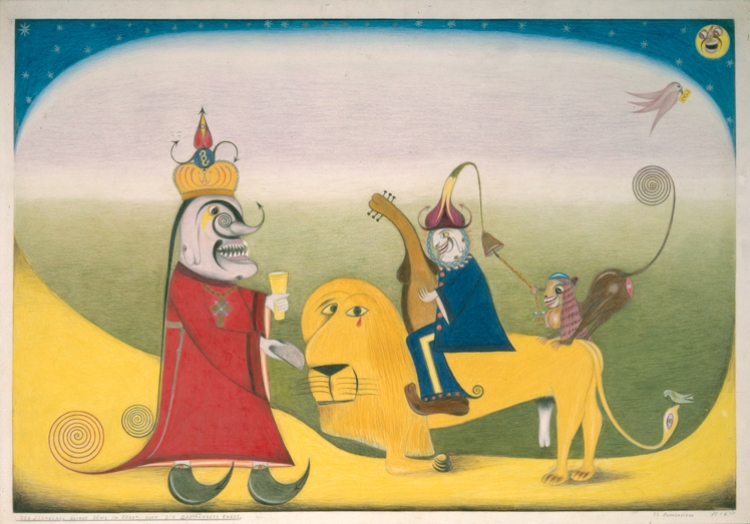 Friedrich Schröder-Sonnenstern (1892-1982), of Lithuanian origin, was born in the Russian region of Sovetsk (formerly Tilsit), close to the German border. The second of thirteen children, he received virtually no education from his parents, who neglected him. At the age of fourteen, he was put into a reform school for vagrancy, theft, and unlawful acts. This was followed by several other prison sentences, between which he managed to complete an apprenticeship in tenant farming. In 1918 he was caught stealing a horse and declared unfit to hold down a job; he was committed to the Sovetsk psychiatric clinic, from which he was released under two years later and sent to live with his parents. He then ran away to Berlin, where he lived under the assumed name of Gustav Gnass. With the complicity of a companion, he earned his living as a right-hand man, dabbling in astrology and curative magnetism, among other activities. He was again imprisoned several times and committed to a psychiatric hospital in Neustadt, in Germany. This is where he seems to have begun to draw.

Concluding that he was not suffering from any recognized mental illness, his medical report authorized his release in 1934. It remains a mystery how he managed to survive the Nazi's systematic extermination of the mentally ill during the Second World War. Returning to his drawing in the late 1940s, he found that his works, surprisingly, began to sell and he started to build a certain reputation, especially in Surrealist circles. He stopped drawing after his wife's death in 1964 and fell into depression and alcoholism. His works were considered scandalous when they were first exhibited. they depict composite figures that are half-human and half-animal in poses that are frequently sexually explicit.