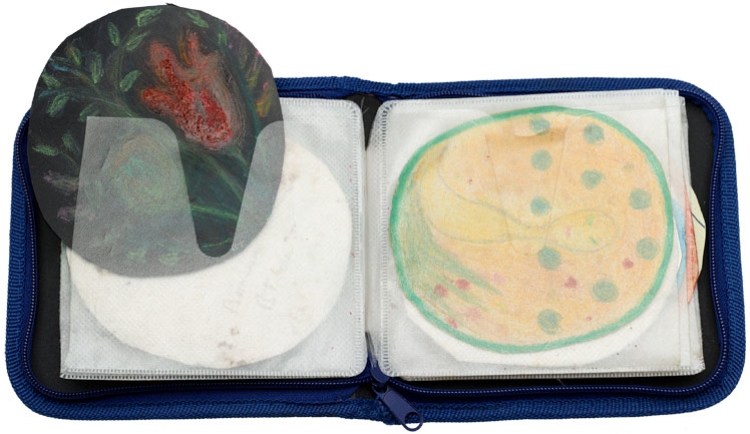 Bernadette Touilleux (1923 – 2010) was born in Rive-de-Gier, in the department of Loire, near Lyon (France), becoming the eighth of already seven siblings. Her father was a steelworks foreman, and her mother ran a haberdashery, where Bernadette joined her at the age of sixteen. Bernadette was difficult and solitary as a youngster; she dreamt of leaving the family haven and pursuing studies to become a teacher. Subject to hallucinations, as of 1954 she was committed several times to a clinic, followed by a two-year stay at a health center in a neighboring town. Thereafter, under obligation to adhere to a strict medication program for her paranoid psychosis, Bernadette Touilleux could return home and live nigh to normally, with the help of her mother and older sister.

Quite probably, it was in the early '70s that she began her creative activity, using various techniques: drawing, painting and watercoloring, paint on glass, paint on ceramics, wood sculpting, assemblages, collages, cutouts, photography...When her treatment was totally ended in 1976, after her mother's death, Bernadette became more solitary but more active artistically. The proceeds from the sale of the haberdashery in 1986 enabled her to devote herself entirely to her creations. She continued her activity in her usual self-effacing manner, without ever giving away any of her pieces. To do her creating, she resorted mainly to salvaged materials or household rubbish collected in the family home: cake wrappings, haberdashery drawers, Christmas decorations, plastic pouches, together with plant elements such as little branches. In 1995 she also acquired a camera, which she took to using to compose still lifes as well as many self-portraits staged in her living space. A fall in 2006 obliged her to transfer to a senior home: here she continued to do drawings and small assemblages until her death, four years later.