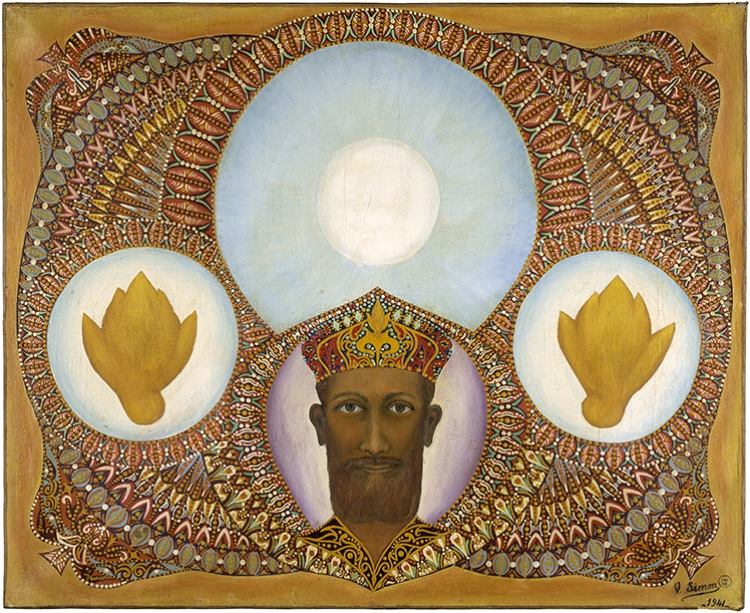 Victor Simon (1903–1976) was born in the small commune of Bruay-en-Artois, in the Pas-de-Calais region of France. When he was a child, he witnessed a simulated procession along a Way of the Cross that affected him profoundly, leaving him with a strong religious sensibility. His nights were filled with fantastical visions in which holy temples jostled with sarcophagi. After he had finished school, he went to work in the mines with his father until he found a job in the accounts department, which he left in 1930 to open a bar-tobacconist’s. Simon took a serious interest in theology and philosophy and studied Christ’s doctrine assiduously, while at the same time attending experimental séances that explored the paranormal. In 1933, he received a message from the hereafter that galvanised him into producing his first monumental canvas, entitled Resurrection. Guided by spirits and exploiting his personal experiences, his most profound visions took shape through the act of artistic creation, and a series of divinatory paintings followed. His geometric compositions, often painted using pure colours, contain Christian figures, religious architecture, and ancient Egyptian, Hindu, or Byzantine symbols. Simon’s works were accompanied by writings and conferences on spiritualism. In 1947, he became honorary president of the Circle of Experimental and Scientific Spiritualism of Paris. He painted a hundred or so small canvases and around ten large ones between 1933 and 1971 that testify to the community of ideas, beliefs, and practices that were typical of the period.