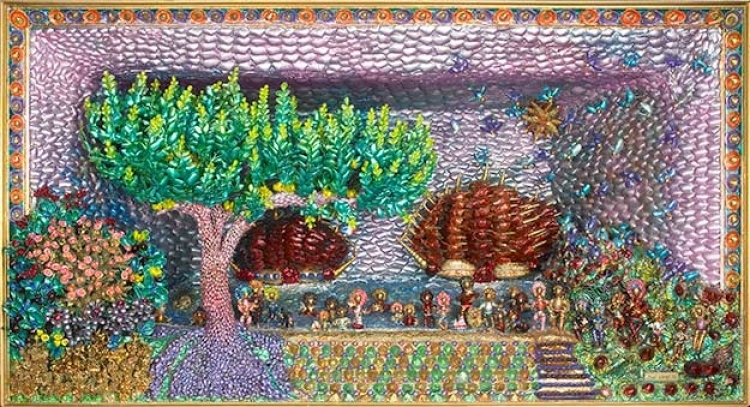 A French Sephardic Jew, Paul Amar was born in Algiers, Algeria. At the age of 17 he went to Paris to learn the trade of hairdressing. In 1945, at the end of the Second World War during which he served as a soldier, he got married, became the father of two children and returned to Algiers to work as a taxi driver. But during the Algerian war, in 1962, he was repatriated to the French capital, where he again worked as a taxi driver. Twelve years later, aged 55, he discovered objects made from shells by chance in a souvenir shop.

Since then, he has embarked on the creation of an initial series of three-dimensional pictures using shells. He eats shellfish in all its forms in order to have sufficient stocks available. In a small room in his apartment used as a studio – he lives in a council flat in Paris – he grinds down and carves mussels, winkles and coral and decorates them with openwork. He subsequently assembles them with glue, then covers them with acrylic paint or nail varnish. Finally, he attaches them to lengths of wire arranged side by side in box-type frames. The pictures are presented in the form of high and low reliefs and are illuminated from within by light bulbs that the artist conceals in sea urchin shells. Ornamentation with vivid, pearly colours saturates the scenes and makes them verge on the sacred.