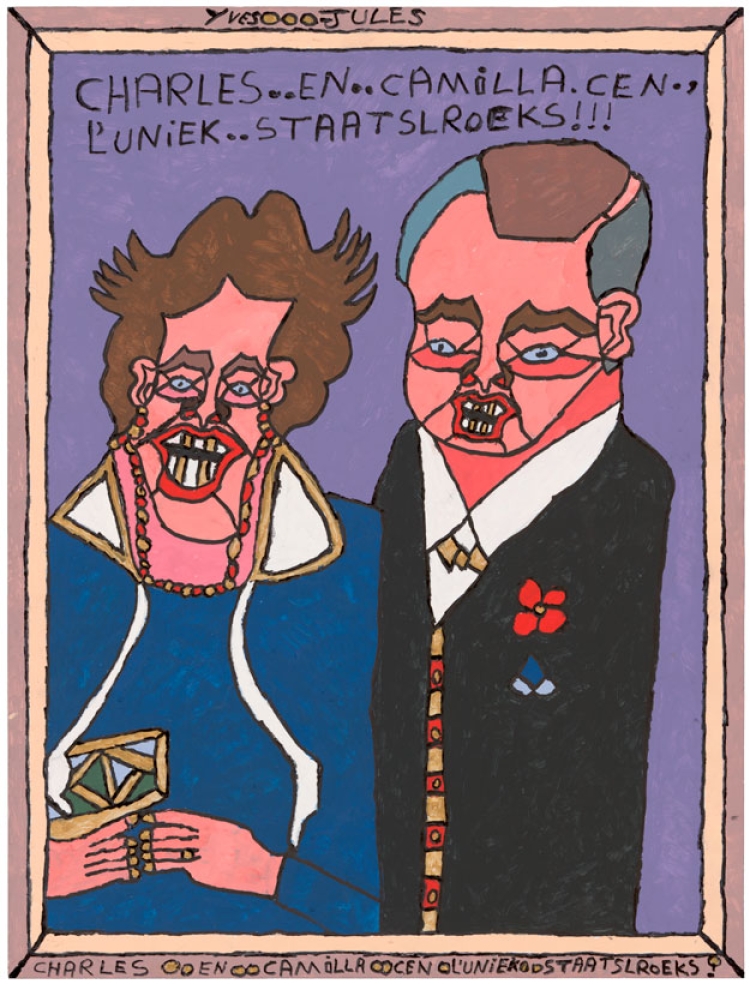 Yves-Jules Fleuri (1960) was born in Lincelles, near Lille (France). His parents, who were circus workers, died when Yves-Jules was but six. The child was first placed in a foster family, and then an institution. Showing signs of having a slight mental disability, at the age of majority he was transferred to neighboring Belgium (France did not have sufficient vacancies for boarding disabled persons), where he was admitted to the Centre Reine Fabiola in Neufvilles; here he worked in the establishment's carpentry workshop. He subsequently joined the institution's "occupational" activities, enjoying theater and horticulture. Having been granted his wish to attend the creative workshop "Campagn'Art," he has continued to assiduously pursue the group's activities since 1997. An ardently enthusiastic participant, he daily draws and especially paints (an activity he already had been carrying out for years) there daily, although he never holds on to any of his creations. Magic, too, fascinates him, inspiring him to practice it whenever there's a chance.

Yves-Jules Fleuri's subject matter comes from the daily news and the reproductions he finds in magazines or art books. His compositions also may feature social events described in illustrated magazines, such as the Infanta of Spain's wedding or the former president Nicolas Sarkozy's official visit. He also enjoys making personal versions of Western art masterpieces, as well as portraits of celebrities or persons he happens to meet. He always surrounds such scenes with a double black frame bearing the creator's name. He first draws a work in pencil, before passing back over it with acrylic paint and highlighting the contours in black felt-tip pen. Systematically, he includes captions identifying the figures portrayed.