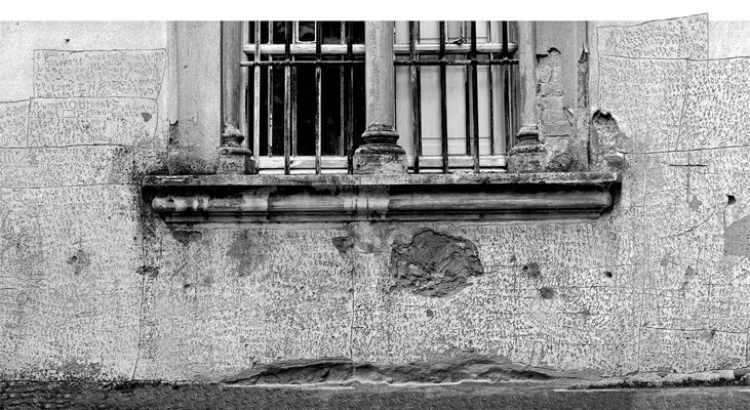 Fernando Oreste Nannetti was born in Rome, of an unknown father. After finishing primary school the young boy was put into a charitable institution and at the age of ten was placed in a psychiatric hospital for minors. He then spent two years in hospital where he was treated for spinal disease. It seems that he later worked as an electrician. In 1956 Nannetti was arrested for insulting a public official and that same year was confined to the Santa Maria della Pietà Psychiatric Hospital in Rome. There, at the age of twenty-nine, he was diagnosed with schizophrenia. Two years later, in 1958, he was transferred to the Volterra Psychiatric Hospital, in Tuscany. In contrast to his period of confinement in Rome when he talked abundantly both day and night, at Volterra he was taciturn and solitary, communicating only with Aldo Trafeli, one of the nurses. But he expressed himself by engraving texts on the courtyard walls of the Hospital’s Ferri block. In 1973 he was moved to the Bianchi Institution, also in Volterra, and then a few years later to another hospital where he stayed until his death in 1994.

Fernando Oreste Nannetti is the author of a written work cut into the stone walls of the Psychiatric Hospital in Volterra, Italy, where he was confined. He said he was in contact with electro-magnetic waves and so, day after day, he recorded that telepathically received information.
His writing, reminiscent of Etruscan inscriptions, reveals a stunning world, somewhere between dream and reality, science and imagination. This monumental creation, the fruit of nine years’ work from 1959 to 1961, and 1968 to 1973, is seventy metres long and stretches across several of the institution’s courtyard walls.
When out on his routine daily walks, Nannetti would engrave his texts on the walls using the metal tongue of the clasp on his hospital-uniform jacket. He would always begin by outlining a large rectangle, a kind of empty page in his book of stone, before going on to inscribe biographical facts, texts about wars, and references to imaginary places and people.