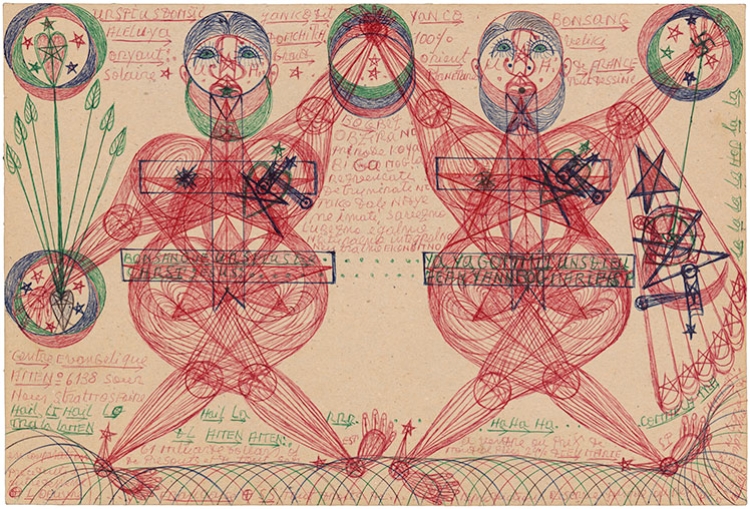 Janko Domsic (1915–1983) was born in Malunje, Croatia. He seems to have completed only elementary school, and the circumstances surrounding his arrival in France are not clear. He probably spent some time in jail before finding work as a labourer on a new railway line at Pont-sur-Yonne in 1935. He then moved to Paris, where he lived in a poky apartment on the sixth floor of a rundown block of flats where he was to remain for the rest of his life. This was when Domsic began to develop his artistic inclinations, drawing on pieces of cardboard with coloured pencils, felt-tip pens, and green, blue, and red ballpoints, mainly in the capital’s vibrant bars. These drawings depict human figures rendered with geometric shapes, so much so that they are made with the aid of a ruler and compass and are combined with symbols and phrases in French, Croatian, or German. Without taking any account of syntax, this jumble of words throws together scraps of personal life, excerpts from Nazi songs, and scatological preoccupations, but refers particularly to religious and mystical ideas. The words ‘Jesus’, ‘God’, or ‘Bog’, in Croatian, appear several times in his drawings. The moral code of freemasonry is another common theme through symbols such as three dots, various abbreviations, pentagrams, or swastikas. Domsic’s figures sometimes feature man as part of the microcosm, Christ, or an angel with outspread wings, but they always convey a sense of mystery. Whatever the nature of the figure, Domsic is sure to identify with it.