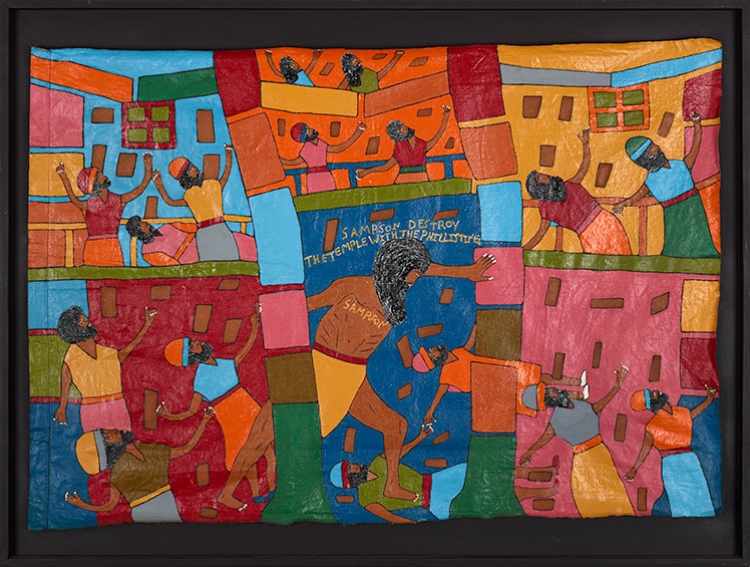 Sampson destroy the temple with the Phillistines

Elijah (1953) was born in Alderton, Jamaica. She was raised in a Christian family and her mother was a priestess in a church. After completing her elementary schooling, she attended the town’s high school and later found employment in an office. During the course of a long and serious illness, the nature of which her doctors were unable to establish, she claims God appeared before her and told her to get baptised, which she hurried to do. Guided by God, she then became a healer and priestess and moved into an economically depressed neighbourhood of Kingston, where every Sunday she holds a service in the church next to the house. She is married with seven children and has brought up several more. As the head of her local community, she divides her time between educating the orphans she is raising, looking after the sick, and painting. In her art too she has been inspired by God, who gave her the power to depict things of the spirit. She began by painting the corrugated iron walls of her house. Her pictures of angels, saints, and prophets are supposed to ward off violence and aggression, and thus have a magical protective power in the tense atmosphere of the run-down area. Elijah has since moved on to canvases, where she continues to portray Biblical subjects from both the Old and New Testament. However, other infl uences typical of the intense religious life of this poor neighbourhood in Jamaica, such as the African animist tradition and Rastafarianism, seem to sneak into her work in unexpected ways. The themes of Elijah’s paintings are highlighted by handwritten inscriptions that draw out the narrative aspects of her work.