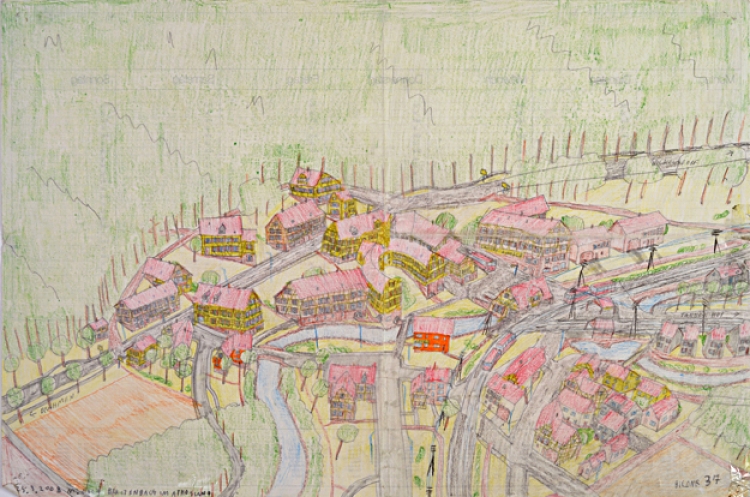 Michael Golz was born in Munich in 1957. As a child he caught a viral infection that, after giving him a high fever over several days, left him with a mental handicap. His mother encouraged all her children—Michael, his twin brother Wulf and his younger sister Dorothee—to draw and paint at an early age, as a means of expressing themselves. This seems to have had a positive influence on Michael's development. Moreover, at the age of seven, he began attending an institution specialized in anthroposophical teaching methods (in Eckwalden, in the Swabian Jura Mountains). Here he carried on his artistic endeavors and, in around 1968, began drawing maps. Over the next few years, Michael studied gardening and organic production. Once he finished his schooling, however, he found he could not cope with the conventional job world; he therefore joined the gardening department of a sheltered workplace belonging to the Theodor Fliedner Foundation in Mülheim, in Germany's Ruhr area. It was in about 1977 that he began drawing a map of "Athosland"—a totally imaginary make-believe land. Michael moved to an independent sheltered housing apartment in 2012, at which point in time he also quit his job to devote himself entirely to his artistic projects.

Michael Golz's universe, which continues to develop and expand day by day, consists of both pictorial creations and a language enriched by a wealth of neologisms. The whole is embodied by a highly impressive topographic map. Once all the different parts are assembled—which comes to no less than 150 cardboard sheets—the map measures 14 by 17 meters.  Colored pencil and felt-tip pen drawings complete this monumental piece, together with a numbered series of thick binders.