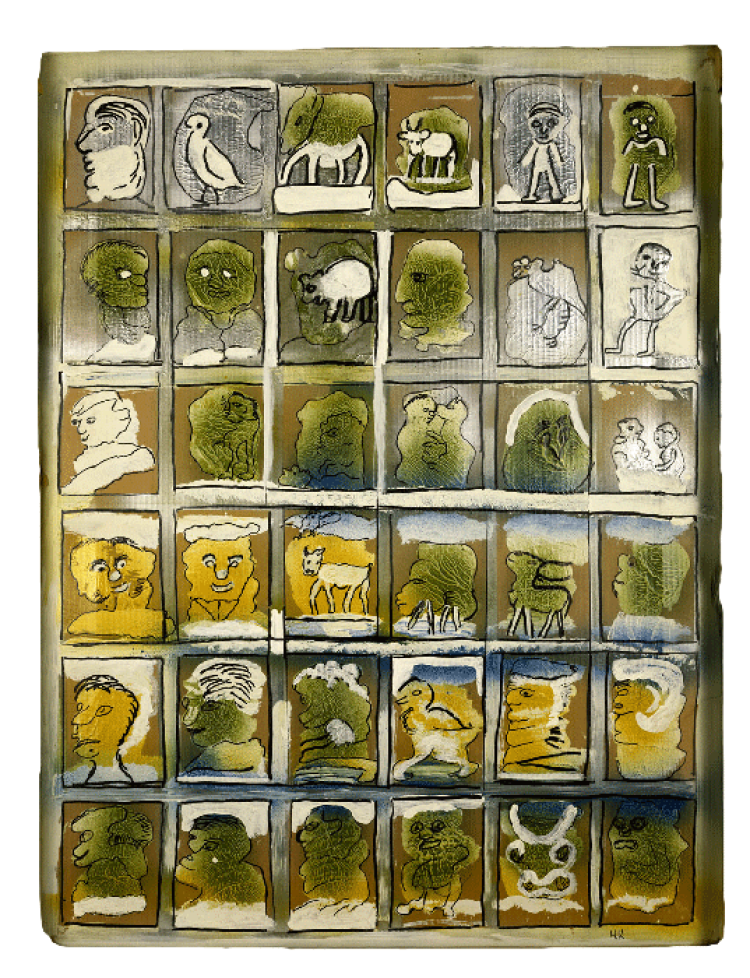 Hans Krüsi (1920–1995) was born in the Swiss canton of Appenzell. At the age of two he was adopted by a farming family, but eight years later was consigned to an orphanage. His education was limited to primary school and he began work very young as a farm boy. His ambition was to be a gardener, but he was unable to obtain the necessary training, and to make a living he sold flowers in several Swiss cities, before settling definitively in Saint Gallen in in 1948. Every day he took the train to Zurich to sell his bouquets on the famous Bahnhofstrasse.

Around the age of fifty-five he began making postcard-size paintings on scraps of paper and cardboard, which he sold to his Bahnhofstrasse clientele. He went on to explore a wide range of materials and media, painting on shopping bags and milk cartons, and making large-scale assemblages and collages. He also used stencils and photocopies to replicate images he would rework later on. His favourite subjects drew on childhood memories: alpine landscapes, chalets, fir trees, the naive paintings known as poyas, and farm animals

Solitary and eccentric, Krüsi lived on the top floor of an abandoned building in the suburbs of Saint Gallen, where he accumulated sketchbooks, old cameras and tape recorders, together with the salvaged materials he would use for painting on.

In 1981 a gallery gave Hans Krüsi his first exhibition, a solo show, after which he was able to devote himself to his creative work and a career as an "art painter", as he liked to put it.

Hans Krüsi's secret gardens were inspired by birdsong and he took pleasure in outlining them with bright colours applied with a generously loaded brush. He sometimes used multiple internal frames to obtain a chequerboard effect.