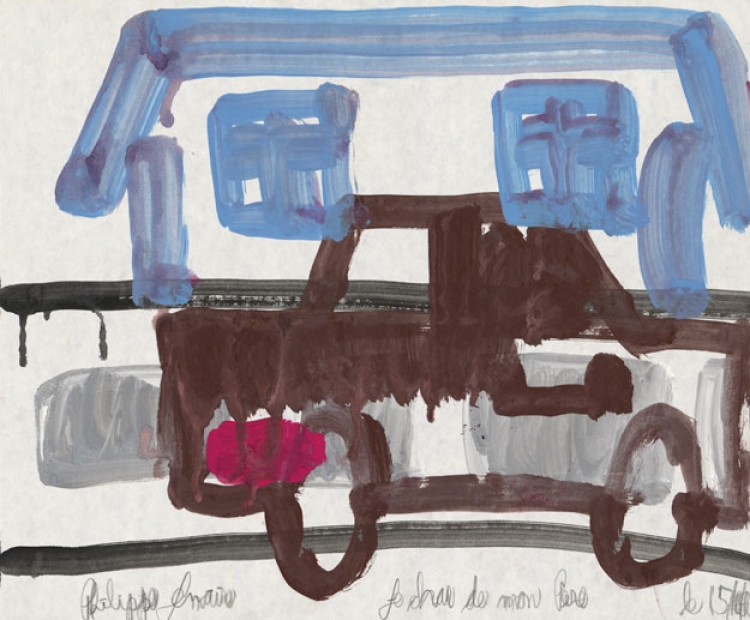 Philippe Lemaire (b. 1954) was born in Montreal. Suffering from schizophrenia with autistic traits, he was hospitalised for the first time in 1975, then transferred five years later to the Louis-H. Lafontaine Hospital, where he has continued to live to this day. Since 1992 he has attended the hospital’s art studio, called ‘Les Impatients’. He has few interests, seldom communicates, and exhibits repetitive behaviour, which can be seen in his work: the only vehicle he draws is the car his father used to drive when he came to take him out for a ride. He calls it ‘my father’s car’ (he uses the word char, Quebec slang for ‘car’).

Lemaire always begins by drawing two horizontal lines with gouache, and two wheels. After a short pause, he completes the car, outlines his father and himself, then stops again for a few minutes. He then adds the background: a garage, a tree or a fast- food store sign. Once he has finished his drawing, he leaves the studio and does not come back until closing time. ‘My father’s car’ seems to bring back a happy memory that he enjoys reliving. Over the years he has occasionally drawn other subjects, such as a sugarhouse, a pumpkin, or a tree.