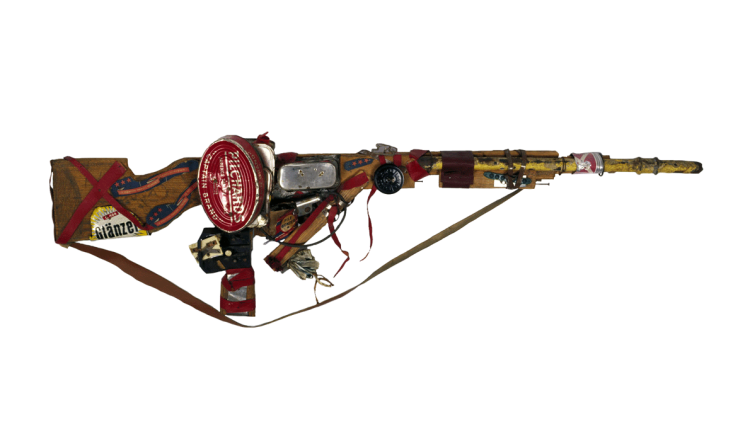 André Robillard (1932) grew up near Orléans, France. His father was a gamekeeper and as a child, André would follow him, carrying the gamebag and sometimes helping to stalk the game. After his parents separated he was placed in the Bourneville Special School, on the premises of the psychiatric hospital in Fleury-les-Aubrais, near Orléans; at the age of nineteen he was committed to the hospital as mentally disturbed. He worked there at various everyday tasks and had a part-time job in the purification plant. This gave him a degree of independence, including living quarters of 150 square metres at one end of the hospital building.

Here he stored the guns, spaceships and sputniks he had been making since 1964 from objects salvaged from the local rubbish dump: food tins, old lightbulbs, pieces of wood, plastic piping and metal bars, which he assembled with adhesive tape and wire. He was also a prolific artist, drawing with felt pens and coloured pencils.

In 1990, he moved into a four-room apartment, still in the hospital, where his work goes on uninterrupted. Since 2008 André Robillard has been writing and performing in theatrical and musical productions for Les Endimanchés, the company founded by Alexis Forestier.