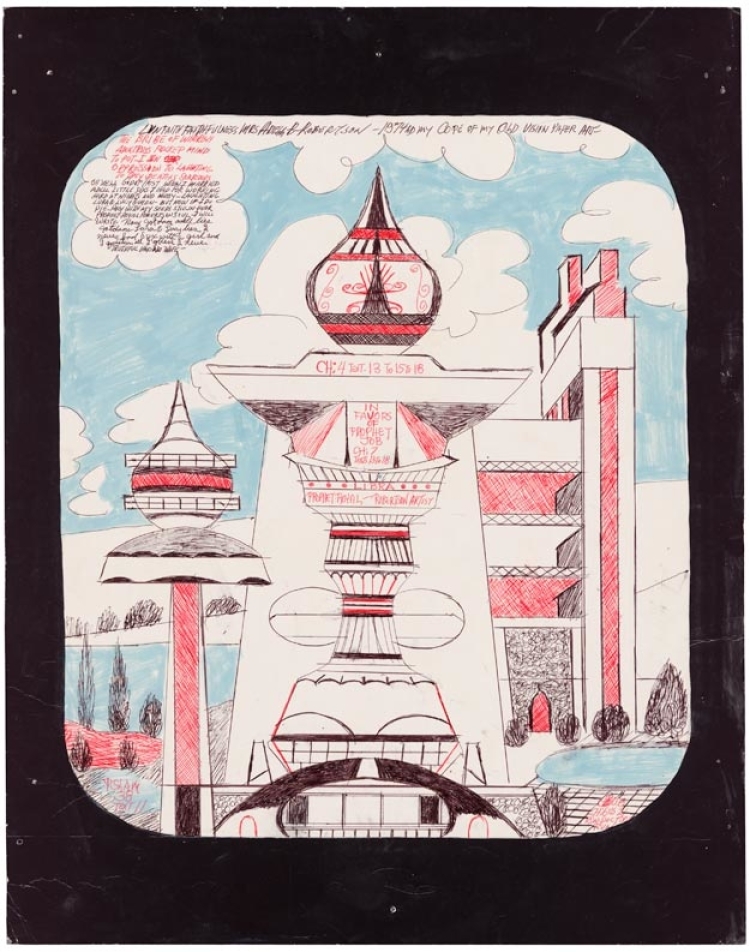 Royal Robertson (1936 - 1997) was born in Louisiana (USA). He lived in St. Mary Parish, his birthplace, and went on to settle in the city of Baldwin, working as a signpainter and field hand. In 1955 he married Adell Brent, with whom he had over ten children. When the couple broke up twenty years later, Adell became the leitmotif of his creations. Their separation deeply upset him, worsening his schizophrenia: he proclaimed himself "Prophet Royal Robertson." As such, he withdrew into a denunciatory monologue shrouded in mysticism and apocalyptic forecasts. He used felt-tip pens and paint on all sorts of supports: posters, advertisements, pieces of wood...even the house's inside partitions and walls. And, too, his fascination with dates comes across in his recurrent use of calendars in his oeuvre.

As a translation of his visions, Royal Robertson's drawings depict futuristic architectures as well as imaginary figures and vehicles. His figurative compositions are inextricably linked to his texts, such as inserted into his drawings. He also salvaged signs and pieces of corrugated sheeting as supports for his writings. In 1992, hurricane Andrew destroyed his house in Baldwin, entirely covered as it was by his graphic works, together with a large share of the rest of his creations. A collector assisted him in salvaging a little prefabricated house: this he set up on the same spot and it is here that he continued to draw and paint his visions until his death in 1997.