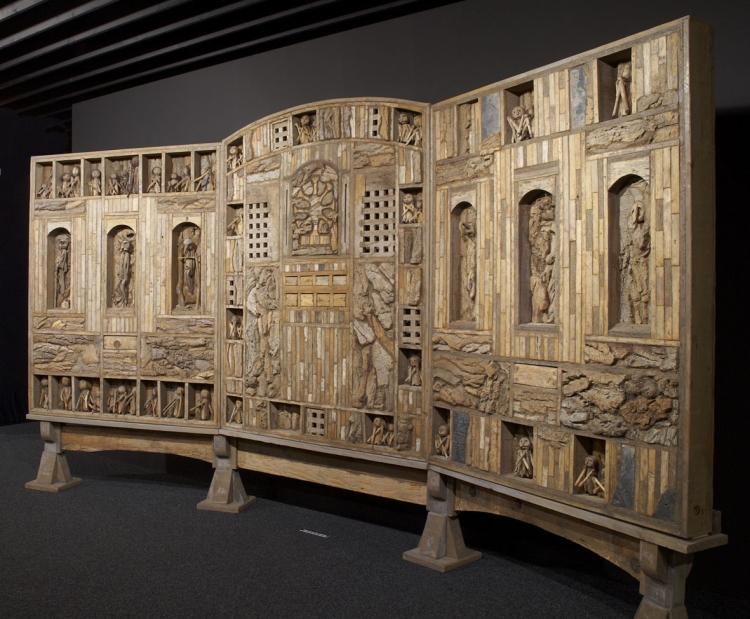 Pascal Verbena (1941) was born in Marseille (France). He grew up in the Old Port district, where his parents worked as wholesale fish merchants. When he was sixteen, Pascal Verbena left to work on a cargo boat. He returned three years later, and joined the navy. A few years later he married; he became a father and found a night job with the Marseille post office. In the daytime, he fished in the rocky inlets and collected driftwood which he stocked in his workshop and later brought back to life. He built them up into constructions made to move thanks to highly precise mechanisms. The thread running throughout his work is his love for hiding places: his works comprise a multitude of sliding doors, drawers, shutters and cavities in which he hides little figures or abstract sculpted shapes.

Pascal Verbena also likes to fashion altarpieces and carved pictures featuring mainly imaginary animals in a prehistoric vein. His more recent works are more abstract: he constructs them out of tree bark, stones and boat wrecks. The Collection de l'Art Brut acquired one of his triptychs in 2012: it is entitled "The Holocaust" and can be considered central to this creator's oeuvre: he himself designates it as a homage to the memory of the deported, of political prisoners and of the victims of injustice from all countries in all times.