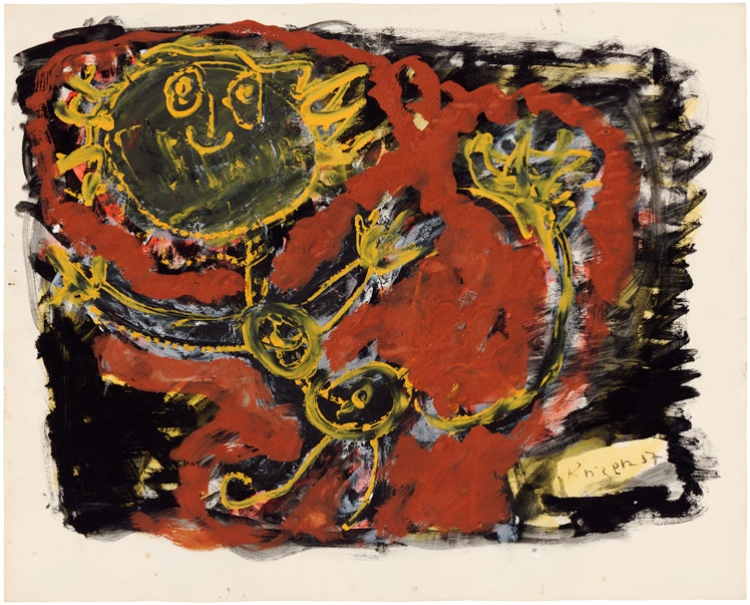 Jan Krizek was born in a village near Prague (Czechoslovakia). His studies at the Fine Arts Academy of Prague were rapidly ended by the start of WW II. The young man began exploring a number of realms on a self-taught basis, ranging from religious art to molecular physics, and including architecture and anatomy. He also took to sculpting, though meeting with no success. He emigrated to Paris in 1948 and began anew doing sculptures. Lacking funds, he used demolition stones collected from building sites. He was interested in archaic art — in Sumerian, Greek, pre-Columbian and Roman statuary — which he deemed to be examples of artistic accomplishment. Having come across his sculptures, Jean Dubuffet set up an exhibition for him in the basement of the Galerie Drouin in 1948. The Surrealist circles of the day, as well as André Breton, with whom there was a short exchange of letters, took notice of his work.

He continued his research by way of drawing and painting, using ink, gouache and lead pencil, given the lack of room for sculpture. In fleeting lines, he depicted figures — often feminine — and faces. Denounced as to his irregular status in France, he was forced to flee Paris with his wife. This turn of events seemingly brought his sculptural activity to an end: he destroyed several sculptures upon his departure, but did continue to draw studies for various potential three-dimensional pieces. He settled in Auvergne, then in Provence, finding temporary employment in a ceramics factory. The couple went on to settle in Corrèze, where Jan Krizek himself built their little house in the town of Goulles and made a living as a beekeeper.