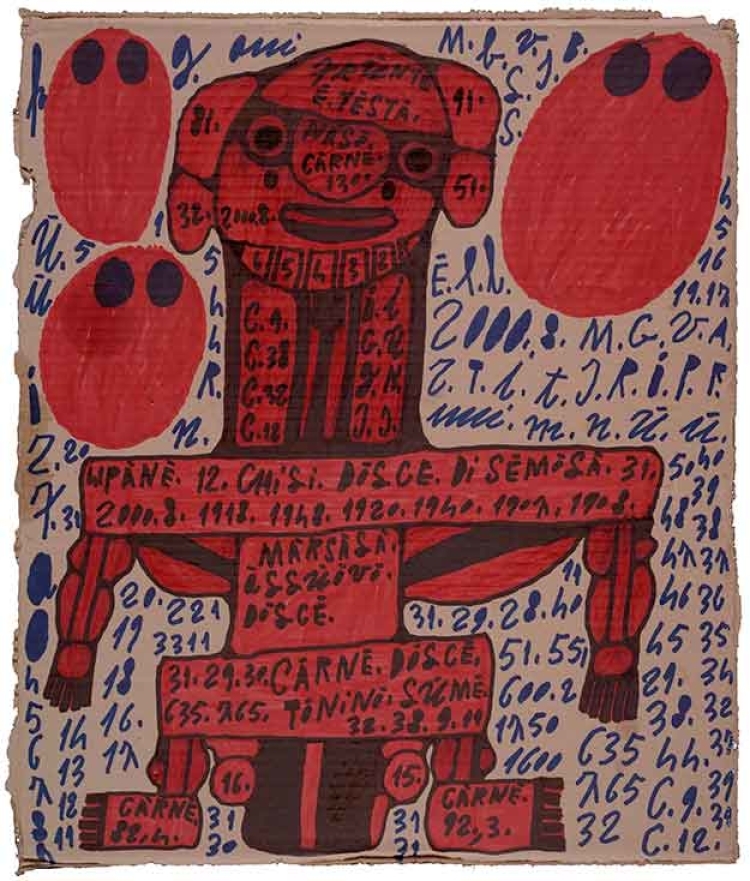 Giovanni Bosco is a native of Castellammare del Golfo, a small town in northwestern Sicily. The second of five brothers, he lived with his mother and father. After two years of schooling he worked as a herd boy. He experienced an initial major traumatism aged fourteen on the death of his father, then two years later on the death of his two twin brothers, killed at the age of sixteen. Giovanni Bosco himself was imprisoned for two years following minor thefts. Following this period in prison, where he incidentally learned to write, he has never worked again.

In his cramped room, his sole space for living, Giovanni Bosco spends hours painting a graphic universe of rare power on bits of cardboard. Restrained and economical forms – essentially parts of the human body such as the heart, an arm, a leg, the lungs, sometimes accompanied by skeletal structure and musculature – are arranged with an innate sense of composition. They are occasionally accompanied by disjointed inscriptions in which the author mentions, among other things, his identity, his year of birth, that of his father, as well as names of Italian towns or Sicilian villages. He also writes the words of old Neapolitan folk songs by Mario Merola, which he knows by heart.

But the urgent need that impels him leads him to overflow the confines of the support and paint on the walls of the small room in which he sleeps, eats, drinks, smokes, sings and paints. The figures that emerge from his brush then take on larger dimensions, sometimes attaining a human scale. But his private space does not suffice to contain his creative fervour. He wanders around, day and night, in the streets of Castelmazzano del Golfo where he lives, marking his passage with oil paintings that he executes on the town’s walls. Giovanni Bosco thus appropriates public space, escaping in this way from the privations and the miserable conditions in which he lives.